Click on any photo for larger version and slideshow

Lulu Martinez is handcuffed and led into a van by U.S. Customs and Border Protection agents. Martinez is a Dreamer and was taken into custody after trying to cross into the United States through the Morley port of entry in Nogales, Mexico. Photo by Perla Trevizo/Arizona Daily Star.

Isidro Alvarado, 36, talks about what he saw on Oct. 10, 2012, when José Antonio Elena Rodríguez was killed by what appears to be from shots fired by Border Patrol. He said he was walking about 20 feet behind the teen when he saw two men ran past him and immediately heard shots being fired. He ran and called dispatch to report what was happening.

One-year-old Lizbeth Sandoval sits while her parents work at the Nogales, Sonora, dump separating garbage in order to re-sell items such as plastic bottles. The dump is located in the Pueblo Nuevo neighborhood about five miles from the U.S./Mexico border.

Daniela Sandoval, 5, stands by the remnants of makeshift homes inside el Tirabichi destroyed by a fire. Daniela and her siblings play in the dump while their mother, Heidi, scavenges for recyclables she can sell.

Domingo Sandoval, 4, takes a nap on top of one of the large bags his parents fill with plastic they scavenge from the Nogales, Sonora, dump. In a city where there’s no formal recycling program, waste pickers collect plastic, cardboard and aluminum to sell to private companies.

Heidi Sandoval takes a break from sorting plastic and holds her 1-year-old daughter Lizbeth. Heidi lived in a makeshift home by the dump in Nogales, Sonora, but she has now built a home nearby with a help of a U.S. church. 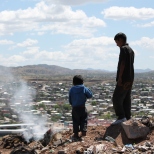 Two boys stand on top of what is left of makeshift homes destroyed by a fire. Most of the families lived by the dump in Nogales, Sonora, where they scavenge for plastic, cardboard and aluminum to sell to private recycling companies.

Lilia Vazquez, 3, was born in the United States but moved to Guatemala when her mother couldn’t find work in Chattanooga, Tenn. 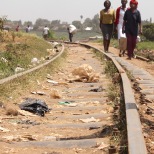 A group of women walk along the tracks in Kibera, one of the largest slums in Africa, in Nairobi, Kenya. It estimated that about one million people reside there.

Tina Springer looks out at the cluster of tin roofs stretching to the horizon in the Kibera slums, one of the largest in Africa where an estimated one million people live.

Tina Springer embraces an old friend who worked in the building where she rents her apartment in Nairobi, Kenya. Springer had been fascinated with Africa since she was a kid, but it wasn’t until 10 years ago that she went for the first stop and hasn’t been able to stop ever since. Now she has friends in every corner. 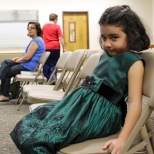 Tamara Khachatryan, her husband Fadi Iskandar and their daughter Angelina Iskandar, 5 (pictured), left Syria last year after the conflict escalated and are now seeking asylum in the United States. They are both concert violinists and they hope to continue pursuing their music careers in Tucson. More than 100,000 Syrians have been killed and millions have been forced to flee since the unrest and violence began over two years ago.

Tucson Police Department officers use pepper spray to force protesters back into the sidewalk. Several dozen protesters gathered outside Southside Presbyterian Church Tuesday night in an attempt to prevent the Border Patrol from taking three people into custody.

María del Rosario Ceballos, 55, looks through clothes gathered between two security fences at the border during the Christmas at Naco event organized by the Bisbee Rotary Club in collaboration with the local government of Naco, Sonora Wednesday, December 25, 2013, Naco, Ariz. 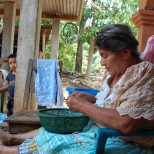 Sofia Geronimo Hernández, 61, peels peas, while her granddaughter Heidi Morales, 10, watches. The family grows peas primarily for consumption, but they sell what’s left door-to-door in one-pound clear bags for five quetzales, or about 65 cents, each.

José Morales and his nephew Esduard Sales Morales, 12, have tamales and soda for lunch, while working in the bean field in La Finca in the neighbording department of Quetzaltenango. The family grows beans, corn, papayas and vegetables mainly for consumption in land they elase about 30 miles away from their home in Aldea el Xab in Guatemala.

People rise very early on the day of a Lent procession in Antigua, Guatemala, to see the alfombras. Neighbors sometimes work all night to prepare the carpets, usually made out of flowers, fruit and colored sawdust. About 60 percent of Guatemalans consider themselves to be Protestant, according to the Guatemalan National Institute of Statistics, but in some cities like Antigua, Catholicism remains strong. Photo taken April 10, 2011.

A man is seen leading the carriers of the float with the figure of Christ and the cross in Antigua, Guatemala. A Lent procession generally begins with incense carriers, the brotherhood’s banner, followed by the carriers and the float. During Lent processions, men by their turn at their local church to carry a massive float that can weigh up to 7,000 pounds. Photo taken April 10, 2011. 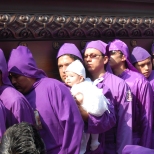 Men, called cucuruchus, dress in purple cloaks, carry a float with the figure of Christ and the cross during the fifth Sunday Lent procession in Antigua, Guatemala. It takes close to 100 men to carry the float that can weigh up to 7,000 pounds. Men generally buy their turn at local church since being a carrier is considered a great honor.

Jackie Niyonzima, 27, and her son Elias Vyizigiro, 5, pose with a picture of her oldest son and her mother who now live in Chattanooga. Money that Jackie’s mother sent back to Burundi helped build this small mud house.

Oscar Baravuma, 38, works on cell phones and computers inside a refugee camp in Tanzania. He fled his native country of Burundi in 1995 after he said his village was burned, people were hacked to death and neighborhoods were divided according to ethnicity.

A boy plays with a makeshift toy car inside Mtabila, a refugee camp in Tanzania that hosted Burundians. 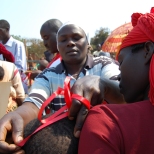 Refugee camp workers place identification cards on children who are leaving the Mtabila refugee camp in Tanzania to go to Burundi.

A family moved in to a new refugee camp in Tanzania. The United Nations gives them some material to build their home and provides food and water. 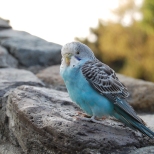 Photo of a wild blue-breasted parakeet taken in Guatemala.