Southwest Key may not accept new immigrant minors in any of its Arizona shelters until the state tells it otherwise.

As part of an agreement with the Arizona Department of Health Services, the Texas-based nonprofit will pay a fine of $73,000 and surrender licenses for two of its 13 facilities in the state, Youngstown and Casa Phoenix.

“We will fully and completely comply with this agreement,” Jeff Eller, a Southwest Key spokesman, said in a written statement. “We are committed to making the improvements that are spelled out, and we look forward to building on these changes for the future. DHS’s priority of keeping all children in our care safe is one we not only share but embrace.”

Southwest Key’s Tucson Estrella del Norte shelter was until recently operating at capacity, which is about 300 minors.

As part of the agreement, the state health department was able to settle licensing violations and add requirements to improve monitoring of conditions at Southwest Key facilities, the department said in a news release.

Whether Border Patrol agent Lonnie Swartz shot and killed a Mexican teen in 2012 because he was fed up with rocks being thrown across the border or acting according to his training in a dangerous situation is at the center of a retrial in Tucson’s federal court.

Swartz is being tried on a charge of voluntary manslaughter in the cross-border fatal shooting of Jose Antonio Elena Rodríguez, 16, after a jury in April found him not guilty of second-degree murder but couldn’t agree on the lesser charge.

Swartz fired 16 shots in 34 seconds, 10 of which hit Elena Rodriguez in the back and head.

“In some cases, the use of deadly force is justified,” Kleindienst told the jury, “but this is not one of them.”

Nearly 40 percent of those caught by the Border Patrol in Arizona are now families and children, most of them Central Americans.

The federal agency made nearly 400,000 apprehensions along the Southwest border in fiscal year 2018, up 30 percent from last year. But most of that increase is due to a larger number of families coming across several sectors of the border, particularly in Texas and Arizona.

In Yuma, where the largest increase in the share of families was seen, more than three-fourths of those apprehended are either members of family units — usually a single parent traveling with one or two children — or minors traveling alone, newly released government data show.

Overall, though, Border Patrol arrests are comparable to levels seen in years before President Trump took office. Immediately after he took office, fewer people migrated, as they apparently waited to see what his administration would do about his campaign promise to stem unauthorized immigration.

The end-of-fiscal-year numbers where released at a time when immigration is a central issue in key midterm elections in the United States and as thousands of Central Americans, many of them Hondurans, make their way north in an effort to seek refuge.

It was about 9 a.m. on Oct. 5, when the call came: Word was that immigration officials would be releasing hundreds of families in Southern Arizona over the weekend. It was Friday.

A few hours later, following a national phone conference with social-service organizations and conversations with local Immigration and Customs Enforcement officials, Teresa Cavendish of Catholic Community Services got a confirmation. More than 700 parents and their children recently apprehended by the Border Patrol — at least 470 in Yuma and 285 in Tucson — would be released in less than 24 hours.

Since 2014, the number of Central American families, particularly from Guatemala, coming across the U.S. southern border has been rising. They either cross the border and turn themselves in to the Border Patrol or present themselves at a port of entry to seek refuge. Recently, they’ve been seeking agents in larger groups, while more families are told to come back later or made to wait longer to be processed at legal ports of entry.

The larger groups have meant that Border Patrol sectors such as Yuma’s are working at over capacity, officials said.

Yuma can keep up to 350 people in custody , whether that’s a family or single adults, said Henry Lucero, ICE field office director in Phoenix, “and over the last few weeks they were operating above capacity with some days 400 to 450 in custody.” Yuma had also started to transfer people to the neighboring Tucson sector, risking filling another sector.

The situation in Yuma, he said, is what ultimately sparked the larger releases to Tucson, Yuma and Phoenix offices. Customs and Border Protection turns people over to ICE after they’ve been processed, which in turn decides whether the person will be released or detained as they go through the immigration process.

In Tucson, Casa Alitas, run by Catholic Community Services, and The Inn Project of the Methodist Church normally receive these families, but they have a combined capacity of 85 people, Cavendish said. The Yuma Refugee Ministry can house about a dozen more.

The release of hundreds meant they couldn’t do it alone. They needed help. 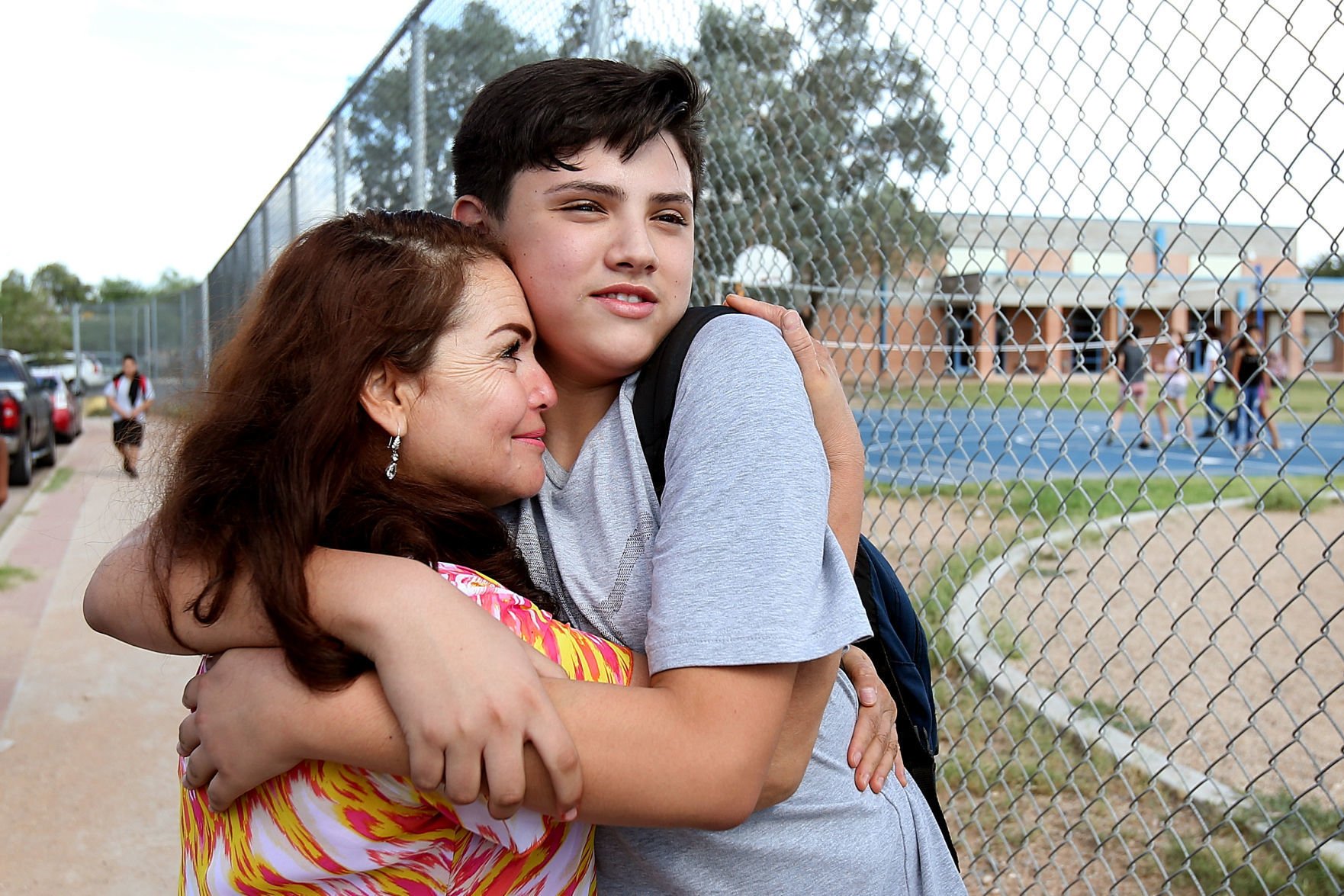 Gloria Arellano de la Rosa had told herself she wouldn’t break down. If I cry, they’ll cry, she thought.

And the last thing she wanted after spending the first month in nine years with her children was to make them cry.

“You know what’s good and what’s bad,” she told three of her four kids as a customs officer and her immigration attorney looked on. “So be good.”

After one last blessing, Gloria walked down the same pedestrian lane she had walked up a month earlier. She passed the street food stalls, the taxi drivers calling out for fares, and entered the busy streets of Nogales, Sonora.

She thought of her family and the time they spent together and the bittersweet reason that let that happen: The U.S. government let her  enter the country for 30 days after her elderly husband was told he had only a few weeks to live.

More than 4.5 million American children have at least one undocumented parent. Although there is no way to track how many have been separated because of deportation or bans, in places like Tucson’s south side, where the de la Rosa kids grew up, these stories are common.

They illustrate the complexities of an immigration system that politicians on both sides say is broken, and the consequences of a 1996 law that compounded mistakes made by Gloria and her husband, including filing the wrong paperwork and leaving the country.

Before then, she likely would have paid a fine for living in this country illegally, then adjusted her immigration status and gone on to live with her family. Instead, Gloria and Arsenio de la Rosa had to choose between having their children grow up with a mother or giving them the chance to take advantage of the opportunities that come with living in America.

They chose the latter.

But for a moment in late August they didn’t have to. They had 30 days to be a family.