Federal prosecutors will consider whether to retry Border Patrol agent Lonnie Swartz on lesser charges after a jury acquitted him Monday of second-degree murder in the 2012 death of a Mexican teen.

“We are very disappointed for the family, for the victim and for the community,” said Assistant U.S. Attorney Wallace Kleindienst outside the federal courtroom in Tucson after the verdict, which was followed by protests that blocked downtown streets into the night.

Kleindienst said prosecutors will assess what was going through the jurors’ minds before deciding whether to retry Swartz on the manslaughter charges.

Swartz was charged in the October 2012 killing of 16-year-old Jose Antonio Elena Rodríguez of Nogales, Sonora. The agent is accused of firing 16 shots through the Nogales border fence in response to a group of rock throwers, including Elena Rodríguez, who was hit eight times in the back and twice in the head.

Continue reading at the Arizona Daily Star or scroll below for complete trial coverage.

For prosecutors, Border Patrol agent Lonnie Swartz was the man who in the span of 34 seconds fired 16 shots through the border fence, killing an unarmed Mexican teenager.

To the defense, he was an agent scared to death, operating in a busy drug-trafficking area, who had to make a split-second decision to protect himself and his fellow law enforcers from a group of rock throwers — including 16-year-old Jose Antonio Elena Rodriguez.

The government decided to retry Swartz on the lesser charges. The new trial is scheduled for late October.

Follow my coverage of the case below. Latest story is first.

Jurors on opposite sides: Was agent stopping threat, or lethally over-reacting?

US border agent testifies he shot Mexican teenager to protect himself, other officers 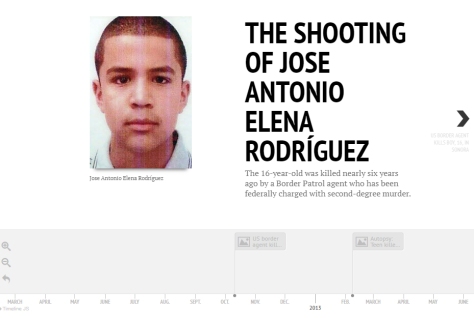 The Arizona Daily Star, with support from the Community Foundation for Southern Arizona and the USC Annenberg Center’s Fund for Journalism on Child Well-being, investigated how Arizona came to have one of the nation’s highest rates of child removal, and how we can keep more kids at home by helping at-risk families break generational cycles of trauma, neglect or abuse.

Four Star journalists talked with more than 100 local, state and national leaders in reform. They visited six U.S. states to see what programs are working to support families at home, transform child safety agencies and guide children and families to a healthy future.

Read the entire series, Fixing Our Foster Care Crisis or check out my stories below.

Scramble for social services draining for families already under stress

Moments of high anxiety for deported dad on custody quest

When a parent is deported, path to reunion starts with Pima County group