When Tucsonan Arsenio de la Rosa’s health deteriorated, he stopped visiting his wife across the border in Nogales, Sonora — as he had done every other weekend for years — while the couple waited out her decade-long ban from returning to the United States.

But on Friday, a few hours after the U.S. government reversed its position and gave Gloria Arellano a 30-day permit to travel to Tucson, she was by his bedside, telling him she was there for him now.

“I came to take care of you,” she said, as she took his frail hand. “So you can get strong and we can walk back home.”

Arsenio de la Rosa, 85, has been given a few weeks to live after he was hospitalized on Aug. 6 and suffered a stroke.

Customs and Border Protection initially denied the family’s request Tuesday to allow his wife to visit, citing her prior denial for a permanent residency card and subsequent 10-year ban for being in the U.S. illegally.

But after public outcry — which included a news conference held by U.S. Rep. Raúl Grijalva and an online petition that amassed nearly 16,000 signatures — additional documentation and support, the federal agency approved the pass on humanitarian grounds.

On Friday, Arellano showed up to the port of entry again, but this time accompanied by immigration attorney Mo Goldman, who assumed responsibility for taking her back to the port once her permit ends. After roughly an hour, they emerged with a thumbs up.

Outside the DeConcini Port of Entry in Nogales, Arellano thanked the government and everyone else who supported her family. She said she had wanted to come see her husband one last time, to comfort her children and “be a pillar on which they could lean.”

This decision means “the world” to his family, said Bill de la Rosa, one of the couple’s four children who mobilized after his mother’s first denial.

“I was in complete disbelief when I found out,” Friday morning that the government would approve the humanitarian pass. “I immediately started imagining her on this side, in her old home, and us as a family,” added the 24-year old Oxford University graduate student, who traveled home to Tucson from England last week.

Local officials called for the federal government to reconsider a woman’s request to enter the United States to see her dying husband in Tucson one last time.

U.S. Rep. Raúl Grijalva sent a request Wednesday to the secretary of Homeland Security asking her to intervene and reconsider the case of Gloria Arellano, who was denied a temporary visit she requested on humanitarian grounds.

Grijalva spoke during a news conference Thursday alongside Arellano’s son Bill de la Rosa, one of her four children who are all U.S. citizens.

“Collectively, as a country, we are going through this divisive, ugly, non-ending debate and struggle around the issue of immigration and the border,” said Grijalva, a Tucson Democrat. “And what Bill and his family are asking is for in the middle of all this is a sliver of compassion, a humanitarian action.”

De la Rosa and his mother went to the port of entry in Nogales Tuesday with a letter from a health center saying Arsenio de la Rosa, 85, has only a few weeks to live.

After roughly a five-hour wait, an officer processing the request told them her application for a temporary permit to come back to the United States had been rejected because she was denied legal permanent residency in 2009. “He apologized and said it wasn’t up to him, it was up to his boss’s boss,” de la Rosa, a 24-year-old graduate student, said then.

The government rejected a Mexican woman’s petition to cross the border back to Arizona to comfort her children and see her ailing husband for what may be the last time.

He had spent the day trying to navigate the complexities of requesting that his mother, Gloria Arellano de la Rosa, be allowed back in the United States temporarily on a humanitarian basis.

“My father is on the verge of death,” he said. “The least they can do is allow her to be with him during these last few moments, to allow him to see his wife one last time.”

Under very specific circumstances, the government can decide to allow people back into the United States for a certain number of days for humanitarian reasons. But it’s discretionary.

Arellano de la Rosa had been allowed in for a few days in 2011 to help care for her husband, Arsenio de la Rosa, when he had a stroke.

But this time, the officer told them he couldn’t allow it, because she was denied legal permanent residency in 2009, Bill said. “He apologized and said it wasn’t up to him, it was up to his boss.”

It’s the same type of confusion he felt when he was 15 and his mother was barred from returning to the United States, said the now-24-year-old graduate student. 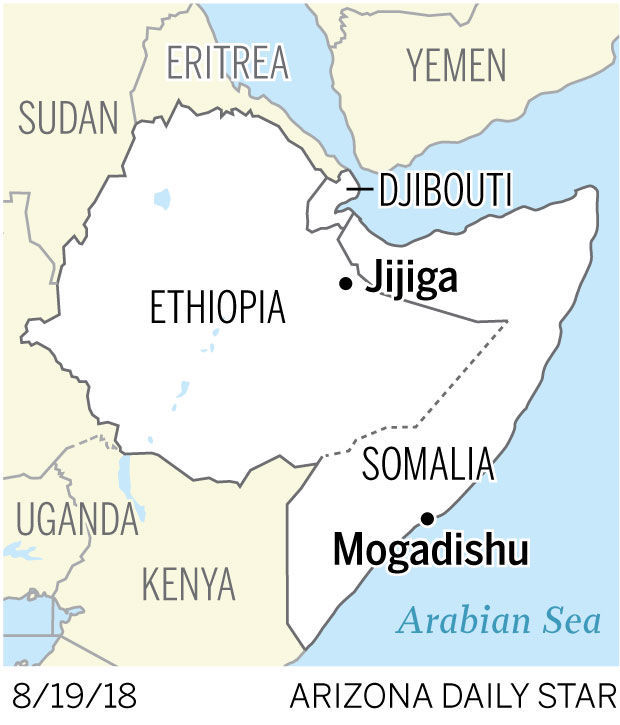 Whether Mohamed Abdirahman Osman is a refugee who lied about terrorist links to get immigration benefits or if he’s been wrongly targeted by a flawed government investigation that matches the Trump administration’s rejection of certain refugees is being played out in a Tucson courtroom.

Hearings here last week illustrated the difficulty in finding facts in the case, including whether Mohamed Abdirahman Osman is even his real name.

Osman, 28, is charged with eight counts of making false statements when he applied for refugee status and legal permanent residency. For the sake of consistency, the Star is using the name listed on court documents.

The government alleges Osman lied about his ties to the terrorist group al-Shabab, his name, his nationality, his father’s name, a brother whom the government identifies as an al-Shabab associate, and that he presented a fraudulent Somali passport to obtain immigration benefits.

Osman remains detained pending trial after a magistrate judge ruled last week that although the government did not “prove by clear and convincing evidence” that he is a danger to the community, it showed he’s a flight risk.

“Given the nature and seriousness of the offense charged, the weight of the evidence against the defendant and the defendant’s family and community ties, the court finds that no combination of conditions exist that would reasonable assure defendant’s appearance at future court proceedings,” Magistrate Judge Jacqueline Rateau said.

During the hearing, Osman’s defense attorney, Jonathan Young, told the court that he will prove his client’s real name is Mustaf Adan Arale — the name the lawyer used throughout the hearing to refer to his client — that he was born in Somalia, not Ethiopia as the government claims, and that he was never an active member of al-Shabab.

For the past two weeks, customs officers have been processing migrant families seeking refuge almost as quickly as they arrive at the downtown Nogales port of entry, compared to the days or weeks families were waiting before.

Delays in the processing of asylum-seekers were not deliberate, said Michael Humphries, who became the permanent Nogales Area Port director in June, but were the result of managing the various demands that customs officers face — including a spike in hard drug seizures.

“If we have three heroin loads today and a meth load, people are going to be tied up and we have to address that, so we have to move people around,” Humphries said. “But sometimes we get lucky and we are able to do a little more.

“We were doing our job to the best of our ability at all times,” he said.